Contact Details:
IM
PM
Personal info:
Full name: N/A
Gender: Male
Location:
DOB: N/A
Site: N/A
Stats:
Joined: Jan 20th, 2012 @ 10:39 pm
Last Visit: Yesterday @ 3:15 pm
Member: #52
Posts: 1544
Group: Member
Nite SodaStream Alchemy (Post) So, after getting the valve off of the canister, my first attempt at refilling with dry ice ended in failure.
Unfortunately, I managed to lose the rupture disc. This is an important part of the unit, not only to prevent a catastrophic failure, but because without it in place filling is impossible.

Near as I can tell, this part is the same as what is on paintball guns. Due to hazard potential, I will not list off the planned alternatives here.

I've decided to play it safe, for this particular part, and ordered a 3rd party replacement.

Side note: There is a severe lack of data regarding this part, at least when it comes to SodaStream units. It took me SEVERAL HOURS just to find out what it was actually called.

This is relatively new territory for me. Expect some trial and error, to end in error... it's all part of the process.
Nite SodaStream Alchemy (Post) Update: finally used all of my first tank of carbon dioxide. Lasted roughly 2-1/2 weeks of near constant usage.

Major snag with trying to refill with dry ice... They put the valve on this thing really super tight. I seem to lack the capability to remove it, at least as of current. The pressure release bolt on the side is a different story entirely.

Fun thing about Carbon Dioxide... it expands when exposed to heat, even as low as room temperature. Even when the tank is empty, you will still be able to shoot CO2 into your water, however at this point the pressure will be insufficient to carbonate your water. THIS is actually how you tell your tank is empty.

My sister is looking at getting 5-gallons of coke syrup next time KFC re-stocks their supply.
I know the ratio is far higher than the concentrates that Soda Club sells, but the concept here sounds promising. Research suggests it's a 5-1 ratio for brand-name syrup. We'll just need to see how long this stuff lasts.

Nite SodaStream Alchemy (Post) Okay, Two additional CO2 tanks arrived today. How I have not used all of the first is beyond me, especially with how I've been abusing the poor thing.

The tanks are advertised for 60 liters of carbonated water (With varying results by unit, and amount of CO2 injected into water...also I haven't been keeping count.)


We'll find out soon enough how long one tank lasts me I'm sure.

I played Game Party 2 last night (Post) Sometimes shovelware can be good though. it just depends on the audience that it randomly happened to land on.

It's hard to believe that Midway, one of the companies behind Mortal Kombat, did this.

Nite SodaStream Alchemy (Post) So, okay, I actually got it exactly one month early, since my birthday isn't until July 24th, and I received it June 24th.

Not much to say really. I like the thing, and I do find it fun to try carbonating things...with varying degrees of not recommended...
(Apple Juice in particular is pretty good carbonated, though.)

I have one of the non-electric units. with a push-button on the top. (They call this one the "Fountain")
I can't imagine why one of these would really need electricity. If I had one of those, I would likely find out how to trip the system manually.

Currently, I've only tried 3 of the flavors available.
Cola, Dr. Pete, and Pina Colada Mocktail.
Cola isn't bad, reminds me of the Walmart store brand. Closer to pepsi. I think some lime might offset the sweetness a bit.
Dr. Pete, from the perspective of someone who doesn't usually drink dr. pepper, is decent. closer to root beer.
and Pina Colada is TERRIBLE!
This is from the perspective of someone who actually likes Pina Coladas.

Other flavors are available, but due to a shortage, and an unwillingness to try the 0 calorie and diet verities, those are all I've tried.
(Seriously, I might have even tried the Extreme Energy flavor if it wasn't sugar free)
All the sweetened ones are advertised to have 1/2 the sugar of regular soda...not sure I believe it.

Other experiments, such as juice, tea, etc, go directly against the warning in the manual stating that this is a very bad idea....
...But when has that ever stopped me, MWAHAHAHAHAHAHAHA!

Tampico fruit punch, which ended up more sour. Not bad.
Cold Coffee....which I would rather not describe the results of...
Iced Green Tea (Arizona), which made it less sweet... I would say this is so-so.
Apple Juice, as noted above. Less sweet, but smooth. the carbonation really compliments this stuff. This would be good for holidays.
And a recipe I heard from Dr. Stone (Anime)... THIS is interesting on so many levels, and leads me to wonder how accurate the things I don't understand from the anime are. The recipe is Cilantro, lime zest, lime juice, and caramelized honey. I need to figure out the actual amounts, but, I can't believe that this worked so well. My result tasted like watered down Pepsi.

I've also invested in two additional carbonating bottles, as well as two additional CO2 tanks.
While services exist to exchange, or refill an empty tank, research suggests I can do so using dry ice.
While again, THIS GOES DIRECTLY AGAINST THE WARNING LABEL, AND THE WARANTEE, I should be able to refill a canister by matching the weight ratio printed on the bottle.
It's also good to know that those services exist, since I cannot get dry ice in the winter time.
I may find myself investing in a full-sized CO2 welding tank at some point. those can also be used.


As a side experiment: I'm also researching the possibility of using the canisters as a computer duster. CO2 is the exact opposite of flammable, I just think it would work well... no results as of yet. 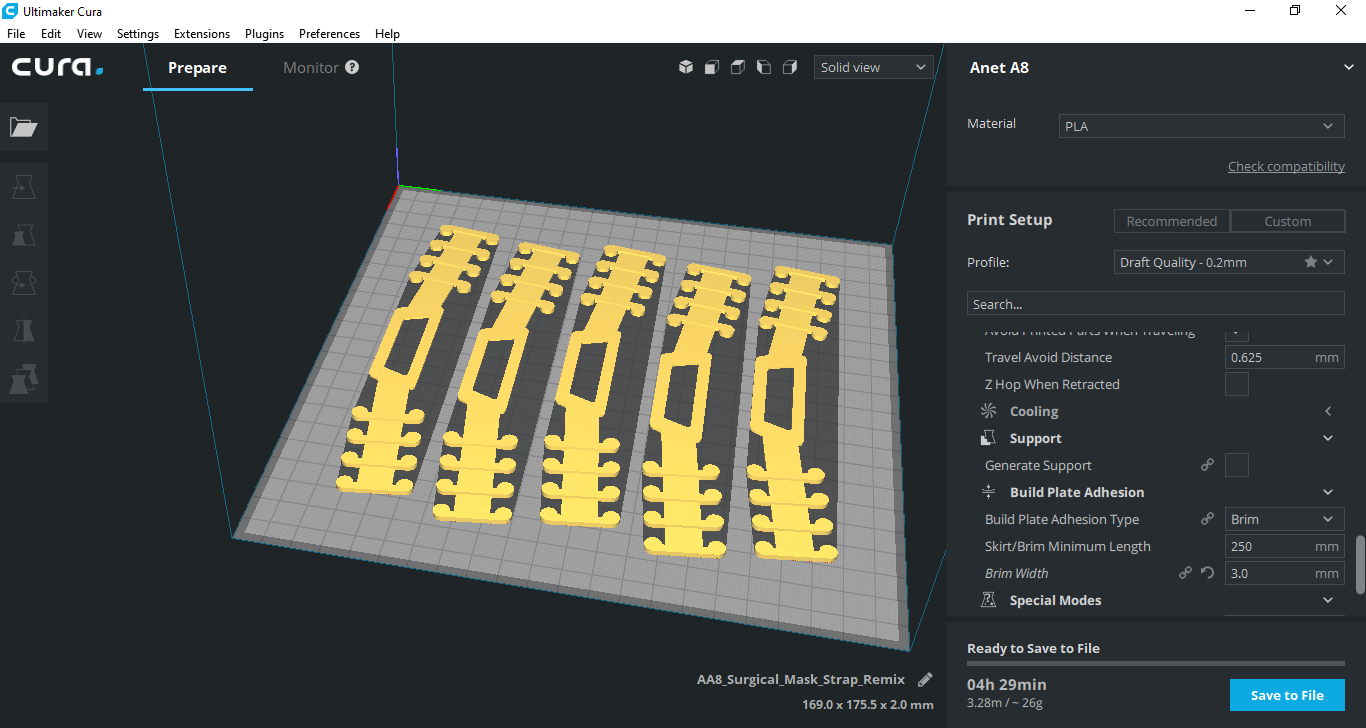 I feel that I have things about as optimized as they are going to get without my printer malfunctioning. Stepping up production. I have an entire roll of glow in the dark fillament, and I intend to use it! These will be distributed around places my family and I frequently go to. my brother and sister's place of work, and a few stores, in particular.
What are you listening to? (Post)
Watch Youtube Video: https://www.youtube.com/watch?v=UAAwTlCp3OE
Popout · Inline
Adventures in 3d printing. (Post) Update:
I've taken the opportunity to run some trial and error on the glow in the dark filament I have, and have gotten some results.

I've since switched to a tungsten carbide nozzle to help against the abrasive nature of Strontium Aluminate. (The glow in the dark material which is laced into the PLA plastic)

After switching the print nozzle temp to 220C, I have been able to print those surgical mask straps with this material, showing usable results.

For me, this is a good finding. I can use the glow in the dark PLA now.
Adventures in 3d printing. (Post) It just seemed like a good idea after thinking about it for a bit, as well as discussing it this morning with my parents.

And don't worry, I'm not going empty-handed either. My sister is getting me a new computer mouse to replace the one I broke recently in return.
Nite's art thread (Post)